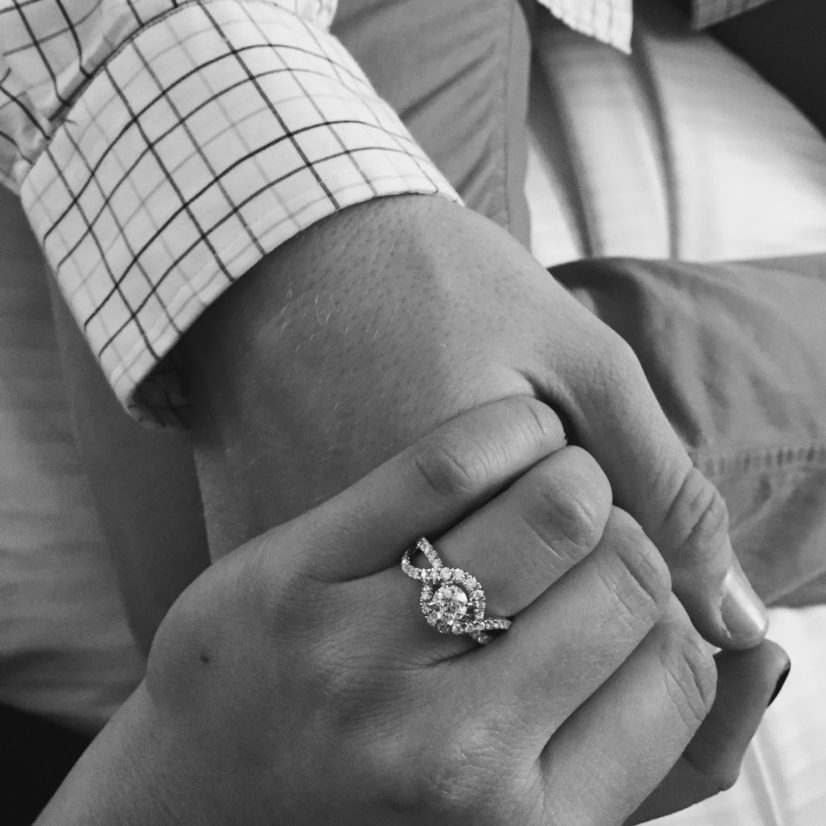 Last weekend was one of the best weekends of my entire life. I still feel like I am in a dream. Kyle’s sweet proposal completely took me by surprise (as you can tell from my reaction in the video!). Here’s a look at the weeks and moments that went into such a thoughtful proposal.

Preparation:
Over the summer, while shopping the Nordstrom sale (of course) there was a Kate Spade watch that I loved on major sale. I sent the link to Kyle and he told me he would buy it, but that I wouldn’t be receiving it until my birthday. After considering just buying it for myself immediately, I agreed that I could wait a few more months for the watch! I couldn’t wait until November rolled around so that I would get to wear it. Little did I know I would be much more excited to receive an even better piece of jewelry..

One Month Before the Proposal:
After I got home from work one day, Kyle told me he was working late and had to drive down to Newton, MA which is about 45 minutes away from where we live. What he was actually doing, however, was driving to the jewelry store with his mom and dad to pick out the most beautiful engagement ring. After picking out everything on his own (I still had NO clue), he stopped at his grandparents house to tell them the news and show them the ring.

Three Weeks Before the Proposal:
Without my knowledge, Kyle drove up to my dad and stepmom’s house after work and sat down at the kitchen table to ask for their permission to marry me. Without hesitation, they of course said “yes” and were so excited. This meant the world to them, that he would choose to meet them in person and ask for my hand in marriage. According to my dad, there was much laughter, tears and hugs as they sat around the table and discussed his upcoming proposal.

One Week Before the Proposal:
Shortly after telling his grandparents the exciting news of his upcoming plans, Kyle’s grandmother passed away. The next 6 days were such a blur for me and Kyle’s entire family. At the time, I still had no idea “the proposal” was about to happen in just a few days, but I was so happy to later learn that his grandmother knew about our future engagement before her passing.

One Night Before the Proposal:
For the last 8+ years, my mom has been playing soccer every Thursday night. It’s her escape to stay fit and grab a drink with her friends after a fun game! Last Thursday night however, she told me she “didn’t feel like playing” because her “knee hurt”. I honestly thought nothing of it and went back upstairs. Not even 10 minutes later, my stepdad came home and said he had a “work meeting”. Again, I thought nothing of it! However, Kyle had secretly planned to meet with them for dinner to also ask them for permission to marry me (my heart melted when I found all of this out). At dinner, my mom and stepdad were over the moon and said they would love nothing more than to have Kyle as their son-in-law.[/cs_text][envira-gallery id=”655″]

Where We Were:
A few months back, Kyle and I decided we wanted to go away somewhere in October so we booked a weekend getaway in Portland, ME. We stayed at the Westin Portland Harborview and it was absolutely gorgeous. I figured we would book the weekend right before my birthday to start celebrating a little bit early (I had no idea we would be celebrating for a completely different reason!)

The Proposal:
On the phone that morning, Kyle had mentioned the only thing he wanted to do was have a nice dinner during our weekend. I agreed and as soon as we got to the hotel, he seemed to be in an immediate rush to get ready (I assumed he was starving per usual). After he had showered and we’d both unpacked, I went into the bathroom to put on some makeup and get changed. He casually walked in and said that he brought my birthday gift, the watch, with him. I was excited because that meant I could wear it to dinner! I walked toward the desk where I saw the pretty Kate Spade box and opened up the watch I had picked up a few months back. Before I knew it, I turned around and heard Kyle say “you can have that, or you can have this…” as he got down on his knee and opened up a beautiful diamond ring. My knees got weak and my mind went blank. All I could think about was that he was playing some silly joke on me but when he uttered the words “will you marry me?” I knew it had to be real. Of course all I kept repeating was “you’re kidding, no way, is this a joke?” because I was just at a loss for words! My heart was so happy. The moment seemed to last forever, yet was gone so quickly. I can say it was one of the happiest moments in my life.

My mind starting flooding with who had he told, were my parents clued in, and how long had he had this planned. In the moments after, we Facetimed our parents, grandparents, and siblings. We were both just overcome with joy. Finally, we went downstairs to the hotel restaurant and splurged on lobster and wine (Ok.. I’m the one who splurged on lobster and wine. Kyle stuck to a burger and beer). After dinner, we continued celebrating by heading to this rooftop bar for drinks. The texts and phone calls kept on coming and with each person I told, the more excited I became.

The Next Morning:
As I laid in our big hotel bed sipping coffee and staring at my engagement ring (seriously.. that is what I was doing.. is that weird?) Kyle worked on a video he said was “part two”. He told me he needed to finish making it but that I would love it once it was done. Finally, he hooked his computer up to the TV and we both watched what was the sweetest most thoughtful video I’ve ever seen. I swelled up with tears and felt so grateful to be holding the hands of someone who has been in my life for over 10 years.

It’s amazing to think that someone I met at the age of 12 years old is now going to become my husband. And he was right in front of me all along…

Thank you to everyone who has reached out and sent their love during this exciting time in our lives.. your words mean so much. I am so excited for our future together and all that is to come. Stay tuned for wedding details.

3 Comments on “The Perfect Portland Proposal”

Get VSM In Your Inbox